Bergstrom-Mahler Museum of Glass acquired a number of glass gifts this year that have not only broadened the paperweight collection, but expanded representation in other glass areas, especially works by Wisconsin glass artists.

Through the generosity of several anonymous donors, as well as gifts from Tom Boldt of Boldt Construction and Dr. Donald Henderson of College Station, PA, the museum has acquired a significant work by former Wisconsin artist and student of Harvey Littleton, David Huchthausen, of Seattle, WA. This work, titled Implosion Sequence, from 2003 currently is on display at the museum.

This addition of this piece builds a collection of works by Wisconsin glass artists. It was in Wisconsin where the Contemporary Studio Glass Movement took shape in 1963 through the efforts of Professor Harvey Littleton, who taught at the University of Wisconsin-Madison from 1951-1976. Littleton’s father was the chief physicist at Corning Glass Works and is credited with the invention of Pyrex, amplifying the significance of glass invention beyond the art studio. 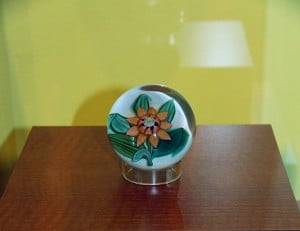 A second acquisition is a paperweight from about 1870, attributed to the French factory near Paris, Cristalleries de Pantin, which made very few objects of this type. Rarity alone, places objects by this factory in high demand and notably of high significance. This piece is listed as previously unrecorded, meaning; it had existed in a private collection and was unknown to the public until its public debut at auction and now in the Bergstrom-Mahler Museum of Glass Collection.

Several factors came together to make it possible to add some important and significant works in glass this year as gifts and partial gifts to Bergstrom-Mahler Museum of Glass. The Mabel R. McClanahan Memorial Study Gallery opened in June to serve as a study and exhibit space for visitors. It holds a growing collection of glass-related books given by glass collectors, a promised gift chronicling the art of Rick Ayotte over his 40 year career and a significant gift of fifteen rare and unusual paperweights from the collection of Gary and Marge McClanahan in honor of Gary’s mother, Mabel, a former Appleton resident and CFO of Crane Engineering.

Museums are places that hold objects of wonder and relevance for the general public to enjoy and understand the incredible impact of humanity or nature over time. Adding to museum collections expands information and preservation of the human activity. The museum is grateful to have donors who give gifts to increase knowledge and understanding of human creativity.